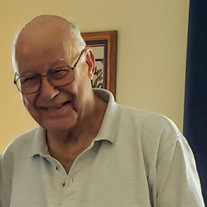 Francis Clifford Weaver Jr. (Sonny), 87, of Hopewell, VA died May 7, 2021. Born and raised in Hopewell, VA he was the son of the late Francis Clifford Weaver Sr. and Bertha Weaver Harvey. He was also preceded in death by one brother, Roy Weaver and sisters, Bertie Littlejohn and Evelyn Warren. He is survived by his wife of 63 years, Jean Marlowe Weaver; son, Charles Weaver (Terri); daughter, Rhonda Weaver Boyd (Ronnie); son, Jay Weaver (Michelle), and son, Glen Weaver; six grandchildren, CJ Weaver, Elizabeth Weaver, Trevor Clayton, Troy Clayton, Chase Weaver and Zach Weaver; two sisters, Phyllis Reish and Linda Hoover (James), brother in law, David Warren Sr. as well as numerous nieces and nephews. Sonny was a United States Navy Veteran, who served in the Korean War. In 1996 he retired from Hercules Inc. where he was an electrician. He was a charter member of Unity Baptist Church. He was a devoted husband, father and grandfather. He enjoyed fishing, hunting, and gardening. He loved talking about his family. A service will be held at 2:00pm on Thursday May13, 2021 at Unity Baptist Church 4951 Mt. Sinai Rd, Prince George, VA 23875. The family will receive friends one hour prior to the service. Memorial donations can be made to the Unity Baptist Church. Condolences may be registered at www.jtmorriss.com.

The family of Francis "Sonny" Clifford Weaver Jr. created this Life Tributes page to make it easy to share your memories.

Send flowers to the Weaver family.