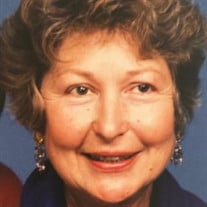 Frances Mason (Sherry) Ferguson of Chester, Virginia died on March 14, 2021 at age 85. She lived a full life and will be missed dearly and of course remembered for her infectious giggle and fun-loving personality. Frances was born on August 10, 1935 in Richmond, Virginia and spent her younger years in Roanoke Rapids, NC before returning to the Richmond area where she lived for most of her life. She was the daughter of the late Francis Mason Sherry and Mary Rudd Sherry, and was preceded in death by her husband of 60 years, Eugene (Fergy) Ferguson, their daughter, Susan Christian Ferguson, and brother Charles (Tootie) Sherry. Frances is survived by her son Scott Ferguson of Midlothian, her daughter Sherry Baum and son-in-law Geoff Baum of Louisville, Colorado, and her four grandchildren Lindsay, Amy, Megan, and Brandon, all living in Denver, CO. Frances graduated from Hermitage High School in 1953 and then attended James Madison University, traveled to Europe and worked at First and Merchants Bank in downtown Richmond prior to marrying Fergy and raising her three children. Frances enjoyed playing tennis at the Chester Pool, bird watching, working at the Chesterfield Library, and laughing with friends, family, and neighbors. She traveled to Colorado over 30 times and was able to ski, snowmobile, hike, and enjoy mountain adventures with Sherry and family and her friends (who absolutely loved her). She adored her son Scott who kept her laughing over the years. She loved going to Nags Head and Duck, NC to spend time with her brother Tootie and traveled frequently to Hampton, VA to spend time on her and Fergy’s sailboat. Frances’s final years were spent at home with wonderful caregivers to assist her. Kindred Hospice was an invaluable service to all. A celebration of life will be held at a future date due to the pandemic. In lieu of flowers, donations can be made to Meals on Wheels (www.feedmore.org/meals-on-wheels). Condolences can be registered at www.JTMorriss.com.

Frances Mason (Sherry) Ferguson of Chester, Virginia died on March 14, 2021 at age 85. She lived a full life and will be missed dearly and of course remembered for her infectious giggle and fun-loving personality. Frances was born on August... View Obituary & Service Information

The family of Frances Mason Sherry Ferguson created this Life Tributes page to make it easy to share your memories.