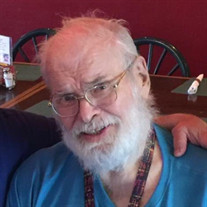 The Beardslee family suffered the loss of its Patriarch, Pat Beardslee this past weekend at the age of 88. He is survived by his wife, Nancy; his daughter, Blythe; and his sons, Brad, Bryce and Bruce. He was the proud grandfather of six grandchildren, Christiana, Caroline, Juliet, Grace, Kate and Peyton. Fay Charles “Pat” Beardslee was born in the 1930’s Depression era in Iowa and believed strongly in hard work, minding his own business and being there for loved ones when they were experiencing hard times. On his 18th birthday, my father immediately joined the U.S. Navy and served during the Korean War. Upon discharge from the military, he attended Arizona State University (ASU), where he was a record holder (breast stroke) on the ASU “Sun Devils” swim team and received his Bachelors in Business Administration. It was in his senior year at ASU when he met the love of his life, my mother, Nancy Beardslee. They were married for 61 years. Upon graduation, they moved to Montana, where he attended Montana State University (MSU) to pursue his MBA, but his father’s death forced him to leave Montana and accept a position with the U.S. Forest Service in Ketchikan, Alaska. This was the beginning of his Federal career and he retired as a Director of DoD Procurement Instruction after 37 years of public service. He (and we) traveled extensively while he worked for DoD and we visited or lived in Germany, Alaska, Panama, Saudi Arabia, Korea and Japan. After retirement, he researched and developed his (partial) Diversion of the Mississippi (Miss West project) and his Southern California drought plan. He promoted its advantages to the country he loved to the end. He wanted no money for the concept, only that it be considered on its merits and long lasting benefits to humans. It is with great sadness that we say goodbye to our father and wish him safe passage to rest in peace. The family will receive friends on Friday, March 19, 2021, from 3pm to 4pm. Funeral service will begin at 4. The Beardslee Family.

The Beardslee family suffered the loss of its Patriarch, Pat Beardslee this past weekend at the age of 88. He is survived by his wife, Nancy; his daughter, Blythe; and his sons, Brad, Bryce and Bruce. He was the proud grandfather of six grandchildren,... View Obituary & Service Information

The family of Fay "Pat" Charles Beardslee created this Life Tributes page to make it easy to share your memories.

The Beardslee family suffered the loss of its Patriarch, Pat...

Send flowers to the Beardslee family.