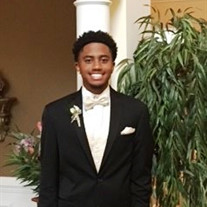 Emmanuel "Manny" Diamonte Brown, 24, of Chesterfield, VA, passed away on Tuesday, February 8, 2022. Manny was born in Carlisle, PA on May 2, 1997 and was preceded in death by his grandmothers, Louvenia Marie Brown and Clarice Brown; and his great-grandparents, Leslie and Jessie Mae Yelverton. He was a graduate of Matoaca High School where he graduate with honors. After high school, Manny went on to further his education by attending the College at Richard Bland of William and Mary in Prince George, VA. He was a proud United States Army veteran and was currently employed by Sitel Group as a call center representative. Manny enjoyed playing basketball, listening to music, rapping and cooking. He will be remembered by his family as a loving and devoted son, brother, grandson, nephew and friend. Manny is survived by his father, Tony Brown; his mother, Felicia Brown; a brother, Dimitri Brown; his step-mother, Pamela Paine; two step-sisters, Shaunesty Fredrick and Paula Williams; two nephews, Diamonte and Jayden Brown; his grandparents, William and Wilhelmina Smith and Lawrence Brown; fourteen aunts and uncles; a host of great-aunts and cousins; and his girlfriend, September Logan. A funeral service will be held at 2:00 p.m. on Sunday, February, 20, 2022 at the Chester Chapel of J.T. Morriss & Son Funeral Home, 3050 W. Hundred Rd., Chester, VA 23831. Interment will be private. The family will receive friends one hour prior to the service at the funeral home from 1:00 to 2:00 p.m. Manny's funeral service may also be viewed via livestream, by visiting www.jtmorriss.com and clicking on the obituary like for Emmanuel Brown. Condolences may be registered at www.jtmorriss.com.

Emmanuel "Manny" Diamonte Brown, 24, of Chesterfield, VA, passed away on Tuesday, February 8, 2022. Manny was born in Carlisle, PA on May 2, 1997 and was preceded in death by his grandmothers, Louvenia Marie Brown and Clarice Brown; and his... View Obituary & Service Information

The family of Emmanuel Diamonte Brown created this Life Tributes page to make it easy to share your memories.

Send flowers to the Brown family.