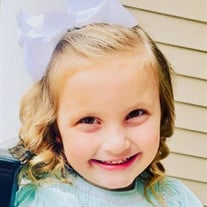 It is with great sadness that we announce the passing of our beloved Emersyn "Emmy" Claire Sweitzer, age 5, who was welcomed into Heaven on February 21, 2022. Emmy was born on August 11, 2016 to her parents Whitney and Shane Sweitzer in Petersburg, Virginia. She was a treasured daughter, sister, and granddaughter, and has been welcomed into the arms of her late great-grandparents and maternal grandmother, Donna Jones. Sassy, spunky, and outgoing, Emmy was a vibrant light that shone brightly on all of those lucky enough to be a part of her life. Those who were privileged to meet her knew that it was impossible not to have your heart touched by her infectious smile and sparkling personality. Emmy was very close with her two loving older brothers, Rayner and Reid Sweitzer. She was their biggest cheerleader, but more often than not, she could be found adventuring right alongside them. Emmy was a spirited ball of energy with a limitless curiosity for life, living every day fearlessly and to the fullest. Emmy was clever and determined in everything she did. She loved to dance and excelled at gymnastics. As the youngest gymnast in her class, she was a rare and special talent, and she was always proud to perform her hard-earned skills. Emmy's light is carried on by her parents, Shane and Whitney Sweitzer; her brothers, Rayner and Reid Sweitzer; her paternal grandparents, Terry and Ray Sweitzer; her maternal grandfather, Ronnie Jones; uncle, Kevin Jones; uncle, Brett Sweitzer and fiancée, Katie Rowley; and an extensive community of family, friends; and fellow members of the Unity Baptist Church who adored her. Emersyn will be fiercely missed by all who knew her, but she will forever be with us in our hearts. A public viewing will be held on Sunday, February 27th, 2022 from 3:00 p.m. to 5:00 p.m. at Unity Baptist Church. The funeral service will be held on Monday, February 28th, 2022 from 11:00 a.m. to 12:00 p.m. at Unity Baptist Church with graveside service immediately following at Merchants Hope Memorial Gardens. Condolences may be registered with www.jtmorriss.com.

It is with great sadness that we announce the passing of our beloved Emersyn "Emmy" Claire Sweitzer, age 5, who was welcomed into Heaven on February 21, 2022. Emmy was born on August 11, 2016 to her parents Whitney and Shane Sweitzer in Petersburg,... View Obituary & Service Information

The family of Emersyn Claire Sweitzer created this Life Tributes page to make it easy to share your memories.

It is with great sadness that we announce the passing of our...

Send flowers to the Sweitzer family.