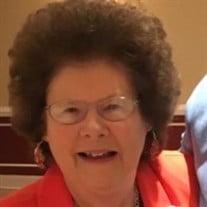 Born May 7,1940 in Newport News, Virginia, Elizabeth Joan Thompson Benka of Prince George, Virginia passed peacefully on February 24, 2021 in Mesa, Arizona. Predeceased by husband, Daniel L. Benka, father, William Wright Thompson and mother, Nellie Matthews Thompson, Elizabeth lived a full life with family and friends. Service to all was the focus of her time and source of happiness. As the daughter of a military officer, Elizabeth grew up a child of the world. Living throughout the United States, Europe and Asia, her experiences instilled in her a curiosity for all that life had to offer and the ability to instantly connect with and develop lifelong friendships with people from all walks of life. Her gregarious and positive nature was infectious to all she met and served as constant inspiration for those who knew her well. Elizabeth graduated from her beloved Punahou in Honolulu, Hawaii in 1958 in which she was active in the alumni association and regularly attended reunions with her family. After attending Radford University, Elizabeth married and became a military wife for 26 years moving back overseas to France, Korea, and across the United States. Elizabeth was proud to have been selected as a Military Wife of the Year finalist in 1974. In the early 1970’s, Elizabeth became an active member of the United States Jaycees. She became a charter member of the US Jaycee Women, President of the Virginia Jaycee Women, and eventually National Vice President of the Jaycee Women. She was honored with the titles US Congresswoman, US Jaycee Ambassador and a JCI Senatorship. She was elected President of the Virginia JCI Senate and as US JCI Senate National Vice President. Elizabeth was currently serving as the Region III Foundation Representative. She also spent considerable time engaged with the Bellwood Women’s Club for which she served as President, Women of the Moose, area Republican Women’s Club and various other organizations always with a focus on “Giving Back”. Elizabeth embraced, mentored and supported many women seeking leadership roles throughout her life. Elizabeth’s amazing memory, intellect and keen wit will be missed by the many people whose lives she has touched. Her storytelling was spectacular and she could make anyone with whom she came in contact, smile. Elizabeth is survived by her son Matthew D. Benka, daughter Joanna K. Tucker, their respective spouses, Amy Warner Benka and Duane A. Tucker, and her three grandchildren, Kyla Tucker, Canyon Tucker, and Matthew Benka. A graveside service will be held on Friday, March 19, 2021 at 1:00 pm at Southlawn Memorial Park. Condolences can be registered at www.jtmorriss.com.

The family of Elizabeth Thompson Benka created this Life Tributes page to make it easy to share your memories.

Send flowers to the Benka family.