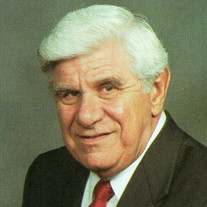 The Reverend Dr. Edward John Stansfield, 85, of Chesterfield, VA, passed away on Saturday, January 29, 2022. Born in Auburn, NY, he was the son of the late William J. and Elizabeth Miller Stansfield. Rev. Stansfield is survived by his loving wife of 65 years, Dorothy Stansfield; two daughters, Beth Ayn Stansfield and Tracy Cornatzer and husband, Ben; four grandchildren, Carly, Rachel, Holly and Josh; his cousin, Susan Van Vlack and husband, Steve; and a brother-in-law, Harry Hoffman. Bi-vocationally, throughout his 13-year pastorate in New Kent, Ed taught high school. His passion for students extended beyond the classroom. He served as a coach to many on the debate and tennis team. Ed never missed a Friday night home football game, where he served as the announcer. At the national level, Ed was the brainchild of the National Bicentennial Debates in joint effort with the VIBC and the Bicentennial Council of the 13 original states. With the help of his friend and colleague, Mike Callow, he brought the top high school debaters from across the country to participate each year in a weeklong tournament in Colonial Williamsburg as part of the centennial celebration. Rev. Stansfield was ordained by Corinth Baptist Church in New Kent, Virginia in 1961, where he started his ministry. Over the years, he pastored several churches in the Richmond Metro area. His heart was with the people of these churches where he devoted his time. His compassion, faith and sense of humor made him a beloved pastor and friend. His love for his family was known by all. He was an amazing husband, a wonderful father and grandfather. Plans for a memorial service will be announced at a later date. In lieu of flowers, contributions may be made to Pine Valley Camp by visiting, https://pinevalleycamp.org in memory of Rev. Edward Stansfield. The family is being served by the Chester Chapel of J.T. Morriss & Son Funeral Home. Condolences may be registered at www.jtmorriss.com. Isaiah 40:31 But they who wait for the Lord shall renew their strength; they shall mount up with wings like eagles; they shall run and not be weary; they shall walk and not faint.

The Reverend Dr. Edward John Stansfield, 85, of Chesterfield, VA, passed away on Saturday, January 29, 2022. Born in Auburn, NY, he was the son of the late William J. and Elizabeth Miller Stansfield. Rev. Stansfield is survived by his loving... View Obituary & Service Information

The family of Rev. Dr. Edward John Stansfield created this Life Tributes page to make it easy to share your memories.

Send flowers to the Stansfield family.