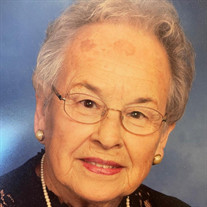 Dolores Lipp Ernest, 92, of Hopewell died Thursday, January 13, after a brief stay in John Randolph Medical Center. Dolores was born in Hopewell on June 26, 1929, to Helen Janosko Lipp and John Fred Lipp. After graduating from Hopewell High School in 1946 and attending a year of business courses, she worked as office manager for Builder's Supply Company of Hopewell. She married in 1951. After her first child was born, she became a fulltime homemaker and mother. A lifelong member of West End Presbyterian Church, Dolores served as a Sunday school teacher, circle chairman, and president of Women of the Church. Later in life, she served for twenty years as volunteer at John Randolph Hospital Medical Center. She was preceded in death by her brother, John Francis Lipp, and her husband, Darrell Todd Ernest. She is survived by a daughter, Janet E. Cash of Lutherville MD, and her husband, Rick; a son, James D. Ernest of Caledonia MI, and his wife, Beth; by grandchildren Lauren and Nathan Cash and Miriam and Samuel Ernest; and several nephews. A graveside service will be held at 2:30 PM Tuesday, January 18, at Sunset Memorial Park, Chester. A memorial service will be held at West End Presbyterian Church on a date to be announced later. Donations in her memory can be made to West End Presbyterian Church, 1600 Atlantic Street, Hopewell VA 23860; or to the John Randolph Foundation, PO Box 1606, Hopewell VA 23860. Condolences may be registered with www.jtmorriss.com

The family of Dolores Ernest created this Life Tributes page to make it easy to share your memories.

Send flowers to the Ernest family.