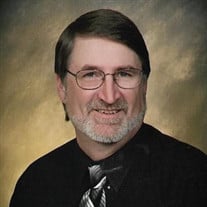 Danny Allen Spivey August 19th, 1954 - October 5th, 2021 On Oct. 5, 2021, at 3:57 a.m., Danny Allen Spivey, 67, a long-haired, Jesus-loving gearhead, departed for his last haul heading north on the Rainbow Expressway to Heaven, leaving behind a legacy of love and friendship that will live on forever in the hearts of those who knew and loved him. Left to cherish his memory are his wife of 47 years, Vickie Spivey; mother, Margaret Spivey; son and daughter-in-law, James and Ginnie Spivey, of Franklin; grandson and his fiancée, Tyler Spivey and Hannah Hasty, of Courtland; step-grandchildren, Jordan, Graysen and Aaron; brother and sister-in-law, Chuck and Debbie Spivey, of Dinwiddie; sister and brother-in-law, Shirley and Henry Story, of Franklin; sister and brother-in-law, Connie Sue and Wally Walker, of Moore, Oklahoma; and many other family and friends. On Aug. 19, 1954, Danny, the man known as “Sidewinder” on the CB radio, slid into the world under the supervision of a high-flying Air Force sergeant and World War II POW, James Asberry Spivey, and his small-town belle, Margaret Allen Spivey. Danny was the youngest to be born to a modest military family that consisted of his parents, one older brother and two older sisters. Danny, like most boys, had a penchant for finding trouble, but it was his early faith in Jesus that helped shape him into a young man that was full of life, love and empathy with a moral compass that kept him grounded and content. After a midwestern run to Del City, Oklahoma, during his teenage years, Danny would return to running the Eastern seaboard. where he met the love of his life and apple of his eye, Vickie Lynn Williams. Vickie, a fiery, petite blonde-haired beauty from Petersburg, captured his affections immediately, then found herself accepting his hand in marriage and riding shotgun in his journey through his earthly life. Early in their 47-year marriage that began in 1974, the two found themselves working in the family trucking business, Spivey Inc., hauling chips, shavings, and lumber for the Union Camp Paper Mill. Danny knew from an early age that he was destined for the open road, his commitment to 18 wheels was just as strong as his devotion to God, his wife, family and friends. It was 1977 when his blond-haired, blue-eyed darling would bless him with a lead-footed, driver-in-training baby boy they named James. Bright-eyed and full of love with the new family addition in tow, “Sidewinder” and “Little Cougar” found themselves embracing the entrepreneurial spirit and set out on their own path, starting a small trucking business, Spivey Trucking. After years of dealing with ticket-happy “Smokies,” late nights sweating in the shop, and mounting regulations, Danny found himself swapping his owner-operated, cab-over Kenworth for the eye-catching, royal blue Ford rigs at Benjamin Moore Paints. After years of delivering millions of colors to the Amish country, the paint ran dry and Danny bobtailed to Ace Hardware to haul home improvement happiness for millions across the mid-Atlantic region. During his time at Ace Hardware, Danny would find himself blessed with another lead-footed driver-in-training, as he welcomed grandson Tyler Daniel Spivey under his protective wing. After nearly 30 years of delivering beautification to the residential and commercial customers with Benjamin Moore and Ace Hardware, Danny would return to his professional roots, once again hauling wood products, this time with Chip Transit, of Courtland. His contentment with returning home to the start of his career hauling chips and shavings with a family-run trucking business was noticed by all. If he didn’t tell you personally, you could still see it in his work ethic and smile. And from dust to dust, it all came full circle for Danny, both with life on earth and life in the truck. Danny was a curious fellow of many interests, when he wasn’t grabbing gears and checking blind spots. His life was full of adventures and interest that included motorsports (as driver and championship winning crew chief), flying planes (licensed pilot), horses, and ATV trips all over the country with his bride and family. Danny was a blessed man and student of the Bible, consistently working to spread the gospel and the love of Jesus. While we will miss his earthly presence, his legacy will live on in all of us — a legacy of hard work, love, empathy, family and friendship! Until we meet again, rest high on that mountain and enjoy the view, because you've earned it. The family will have the visitation at 1 p.m., followed by the memorial service in his honor at 2 p.m., on Friday, Oct. 15, 2021, at the Dinwiddie Chapel of J.T. Morriss & Son Funeral Home, 6616 Boydton Plank Road N., Dinwiddie. Graveside service will follow at Southlawn Memorial Park. Condolences may be registered at www.jtmorriss.com. There will be a celebration of life cook-out at 1 p.m. on Saturday, Oct. 16, 2021, at their farm at 21172 Ivor Road, Courtland. Please bring your photos and stories to share.

The family of Danny Allen Spivey created this Life Tributes page to make it easy to share your memories.

Send flowers to the Spivey family.