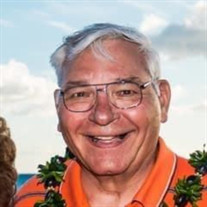 Born October 22, 1939 in Cudahy, Wisconsin, Lieutenant Colonel (retired) Daniel L. Benka of Prince George, Virginia passed unexpectedly on January, 26, 2021 in Mesa, Arizona. Predeceased by father, Thomas John Benka and mother Julia Dembowski, Daniel lived a full life dedicated to family, service, and faith. A 1957 graduate of Cudahy High School, “Danny” went on to study Economics at Ripon College in Ripon, Wisconsin. There he participated in the ROTC program, was a member of the Merriman fraternity, and played football as a Center. Daniel graduated in 1961 with a Bachelor of Science in Economics, received the ROTC Distinguished Military Graduate recognition, and was commissioned as a Second Lieutenant in the United States Army. Daniel served in the US Army from 1961-1987. His tenure in the Army included two tours in Vietnam, three years in France, and two years in South Korea. He also received his Master’s Degree in Economics from the Florida Institute of Technology in 1978 while he was serving. Daniel was a recipient of the Meritorious Service Medal with Oak Leaf Cluster, the Defense Meritorious Service Medal, and the Bronze Star. He retired from the Defense General Supply Center in Richmond, Virginia as a Lieutenant Colonel in 1987. Post retirement, Daniel continued to work with the Department of Defense and Dominion Energy. Spending much of his time involved in community service organizations, Daniel was past Commander of the American Legion Post 146, past President of the Hopewell Lion’s Club, member of the Hopewell Veterans of Foreign Wars (VFW), Loyal Order of the Moose, Third Degree member of the Knights of Columbus, and longtime parishioner of Saint James Catholic Church. Daniel joined the Warrenton, Virginia Jaycees in May 1972. He became a life member of the Virginia Jaycees, an Ambassador of the US Jaycees, and a Senator of the Jaycees International (JCI). Daniel was Virginia JCI Senate President from 2002-2003, National Vice President from 2006-2007, and served as President of the District of Columbia JCI Senate from 2010-2011. He was also a Platinum level member of the US JCI Senate Foundation. Dedicated to service, Daniel also served on many influential program committees and task forces across his communities over the years. Daniel is survived by his wife, Elizabeth Joan Thompson Benka, son Matthew D. Benka, daughter Joanna K. Tucker, their respective spouses, Amy Warner Benka and Duane A. Tucker, and his three grandchildren, Kyla Tucker, Canyon Tucker, and Matthew Benka. A funeral service will be held at 2:00 p.m. on Saturday, February 20, 2021 at Southlawn Memorial Park. In lieu of flowers, memorial contributions can be made to the American Legion. Condolences may be registered online at www.jtmorriss.com.

The family of Daniel Lawrence Benka created this Life Tributes page to make it easy to share your memories.

Send flowers to the Benka family.