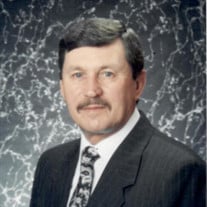 Clyde Lewis Smith, 86, of Hopewell, VA passed peacefully at home on Friday March 5, 2021. He was born in Mercer County WV on October 11, 1934. He was the son of the late Mae Virginia Smith and the late Luther Allen Smith of Princeton WV. He was educated in Princeton WV and retired from Allied Chemical after 35 dedicated years of service. He was a member of Powers Memorial Baptist Church, the DuPont Masonic Lodge, VFW post 637, American Legion Post 146, and Hopewell Moose Lodge 1472. He was a veteran of the Korean War, and served honorably 1952-1955. He was preceded in death by his loving wife Jo Anne Smith of 58 years; and his brother James Smith. Survivors; sister June Kirby and brother Roger Smith; daughter Eva Gross, sons Jeffrey Smith Sr. (Brenda), and Mark Smith Sr. (Rita); 6 grandchildren; Eric, Jeffrey Jr., Adam, Jessica, David, Mark Jr.; great grandson Gordon; and companion Brenda Joyce as well as numerous family and friends. During his early family years, he was a founding member of the Powers 4 Quartet which later became the Gospel Journeymen Quartet. They made several Gospel albums and served God through their ministry traveling up and down the east coast. After retirement he enjoyed traveling with his wife Jo Anne from coast to coast. Clyde loved spending time with his family, woodworking, camping, fishing, hunting and playing tennis with his friends. His last few years were spent with his loving companion Brenda Joyce. The family would like to give a special thanks to the nurses of Crater Community Hospice; Kelly, Amy and Father T. In lieu of flowers the family requests memorial contributions be made to Crater Community Hospice 3916 S. Crater Rd Petersburg VA 23805. A memorial service will be held at 10:00 a.m. on Saturday, March 13, 2021 at the Hopewell chapel of J.T. Morriss & Son Funeral Home. The service will be live streamed, go to www.jtmorriss.com. Also, please consider visiting the funeral home website or calling the funeral home to leave a Hug From Home signifying your attendance at the service. Condolences may be registered online at www.jtmorriss.com.

Clyde Lewis Smith, 86, of Hopewell, VA passed peacefully at home on Friday March 5, 2021. He was born in Mercer County WV on October 11, 1934. He was the son of the late Mae Virginia Smith and the late Luther Allen Smith of Princeton WV. He... View Obituary & Service Information

The family of Clyde Lewis Smith created this Life Tributes page to make it easy to share your memories.

Send flowers to the Smith family.