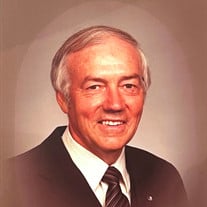 Clarence Edward Walker, Sr., 88, of Chesterfield, VA, went to be with his Lord and Savior on Saturday, February 5, 2022. Born in Chesterfield, VA, he was the son of the late Clarence McKeever and Mary Ruth Moore Walker; and was also preceded in death by his loving wife of 61 years, Janice P. Walker; four brothers; and three sisters. Ed was a United States Navy veteran having faithfully served his country from 1950 to 1961. He had retired from Brown and Williamson Tobacco Company in Petersburg as a machinist, and later became Supervisor of the Machine Shop. After his retirement, he went on to own and operate Ed's Repair Shop out of his home in Chesterfield County. He was a member of the Crater Road Antique Car Club and the Retreads International Motorcycle Club. He was a faithful member of Matoaca Baptist Church where he had served as a Deacon. Mr. Walker is survived by his son, Eddie Walker, Jr. (Juanita); two daughters, Arie Ackerman (Larry) and Pam Vaughan (Red); six grandchildren, Kerri (Shane), Tracey (Mike), Lauren (Eric), Trey (Genevieve) Briley (Weston) and McKeever; seven great-grandchildren; one brother, James Walker; two sisters, Louise Perkinson and Brenda Wilson (Charles); and numerous nieces and nephews. A funeral service will be held at 2:00 p.m. on Wednesday, February 9, 2022 at Matoaca Baptist Church with the Rev. Marco Smith officiating. Interment will follow in Sunset Memorial Park, Chester, VA. The family will receive friends one hour prior to the service at the church. The family is being served by the Petersburg Chapel of J.T. Morriss & Son Funeral Home. In lieu of flowers, contributions may be made to Matoaca Baptist Church or to your favorite veterans organization in memory of Clarence E. Walker. Condolences may be registered at www.jtmorriss.com.

Clarence Edward Walker, Sr., 88, of Chesterfield, VA, went to be with his Lord and Savior on Saturday, February 5, 2022. Born in Chesterfield, VA, he was the son of the late Clarence McKeever and Mary Ruth Moore Walker; and was also preceded... View Obituary & Service Information

The family of Clarence Edward Walker, Sr. created this Life Tributes page to make it easy to share your memories.

Send flowers to the Walker family.