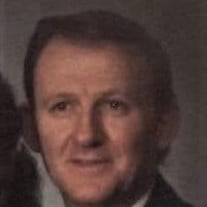 Clarence “Slim” Owen Bowles, 82, of N. Prince George, VA, went to be with the Lord, Thursday, January 21, 2021. Born and raised in Raleigh, NC. He was the son of the late Rufus Bowles and Nellie Mae Vaughn, and was also preceded in death by his daughter Ann Znidarsic; granddaughter, Cadence Elizabeth Konitzer; and sister, Peggy Spivey. Clarence affectionately known as ‘Slim”, worked as an operator at Honeywell and retired after 35 year of service. Post-retirement he worked as a United States Postal letter carrier. He had a strong belief in God and loved his country. He enjoyed NASCAR, watching old western on TV taking his wife out to the movies, family cookouts and family get togethers by the backyard pool, riding his Goldwing motorcycle, but most of all he loved spending time with his grandchildren. He is survived by his wife of 64 years, Elnora Marie Bowles; daughters, Lorna Darlene Amos of Prince George, Tina Nadene Tanner of Chesterfield and Kathleen Jonel Bowles of Prince George; grandchildren, Charlotte Konitzer and husband Neil of Williamsburg, Rachel McCoy of Prince George, Rebekah Amos of Prince George; eight great-grandchildren Hannah, Ashley, Stevie, Whitney, Owen, Dylan, Case and Molly; four great step-grandsons, Timothy, Ian, Cameron, and Matthew; three nieces and one nephew. A funeral service will be held at 11:00 a.m. on Thursday, February 11, 2021 at the Hopewell Chapel of J.T. Morriss & Son Funeral Home, 820 W. Broadway Avenue, Hopewell, VA 23860. Interment will take place in Southlawn Memorial Park. The Family will receive friends one hour prior to the service. In lieu of flowers, memorial contributions may be made to the Wounded Warriors. Condolences may be registered online at www.jtmorriss.com.

The family of Clarence "Slim" Owen Bowles created this Life Tributes page to make it easy to share your memories.

Send flowers to the Bowles family.