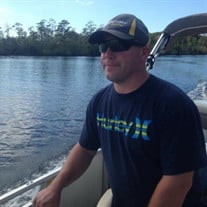 We lost our beloved Chris on April 8, 2021. He was only 46. Chris was loved by so many people and he had so many friends, whom he called his "Buddies." He was kind, helpful to anyone in need, compassionate, generous, and a wonderful gift to us. He loved being outdoors, especially on the water, whether it was the river, the bay, or the ocean. On his boat with a group of friends or family made him happy. Fishing on the Chesapeake Bay was a great day for him, whether he caught anything or not. Nags Head and Cape Hatteras were his places to retreat. Shorts and flip flops were his constant wardrobe. Chris was definitely a casual type of guy. Chris was wonderful with machinery and could fix almost everything. He never bought a new car or boat because he wanted to work on them and fix whatever was wrong. From a very young age he brought home go-carts, dirt bikes, four wheelers, jet skis, and motorcycles, much to his mother's chagrin. Of course, he worked on all of them constantly, but that was his enjoyment of them. He loved his job at Dupont where he worked in electrical maintenance. He found a wonderful home there with friends that he loved doing what he was meant to do. He wanted to work with his hands and not sit at a desk all day staring at a computer. He never complained about the long hours or the difficult and sometimes dangerous work that he was called to do. Leaving us with broken hearts are his parents, Leslie and Bin, his brothers and their wives, Binford and Deanna, and Ashley and Ashleigh. He didn't have any children, but adored his nephews, Bin, Caleb, Mason, and Brock as if they were his own. His aunts and uncles, Heather and Gibbons, Katie and Gary, and Margaret and Tom miss him greatly. His cousins and their spouses were loved by him; Gib and Jennifer, Will and Lauren, Joe and Taylor, Josh, Emmeline, Peter and Cecile, Ellie, Abby, Tucker, Olivia, Paul, Whitley, and Isabel. In lieu of flowers and if you would like, donations can be sent in his memory to the hospital that helped him so much: Nash UNC Health Care Foundation, att: Sara Hodges, 2460 Curtis Ellis Drive, Rocky Mount, NC 27804. Online donations may be made at nashunchealthcare.org/donate. The service for Chris was held by the James River with only his family in attendance, as he had requested. To know Chris was to love him and we definitely did. He will stay in our hearts where we will always have him.

We lost our beloved Chris on April 8, 2021. He was only 46. Chris was loved by so many people and he had so many friends, whom he called his "Buddies." He was kind, helpful to anyone in need, compassionate, generous, and a wonderful gift... View Obituary & Service Information

The family of Christopher Nelson Sloan created this Life Tributes page to make it easy to share your memories.

Send flowers to the Sloan family.