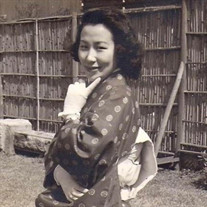 Choko Kazama Loden, 92, departed this world on April 13, 2021 in Chester, Virginia. She was born in 1928 in Tokyo, Japan. By her teen years in Tokyo, she survived the March 1945 firebombing by US forces. She graduated from a two-year women's college run by Canadian missionaries. It was at an automobile dealership where she re-encountered Paul Loden, a young former GI from Redwater, Texas, who was employed by the Occupation government. After two stints of the lovers being separated by the Pacific Ocean, Paul returned to Japan in 1954 and the two were married. Daughter Frances was born in 1956 and Choko became a naturalized citizen of the US in 1957. Son Ron was born in 1959. In 1962 the Loden’s embarked on a new life in El Paso, Texas, where Paul was employed at Fort Bliss. Stints in Novato, California, where Paul worked at the Presidio of San Francisco, then Camp Zama, Japan, then back to Novato for the 1970s followed. In 1975 the whole family drove cross-country to Chesterfield, Virginia, where Paul transferred to work at Fort Lee. He retired from there, went into the private sector, and they have lived in Chesterfield to the present day. Frances returned to the San Francisco Bay Area for graduate work at the University of California, Berkeley, and makes her life there as a college instructor in film and ethnic studies. Ron attended Virginia Tech and works at General Electric as a facilities manager. Choko was a devoted and meticulous homemaker and cat lover who set high standards and inspired her kids to embrace their Japanese roots. She inculcated in them a respect for their elders, an appreciation for beauty and art and a wry sense of humor. She hosted visits from the more adventurous of her Japanese family, with whom she stayed in touch until dementia isolated her. These things she shared with Paul; whose Texas origins somehow harmonized with hers. If one good thing came of the US war against Japan and the Occupation, it was their marriage. They were happily married for 66 years. Choko is survived by her husband Paul of Chesterfield; Frances and her husband Joel Loree of Berkeley, California; Ron and his wife Betty Jo of Chesterfield and their daughter Chelsey (and her daughter Natalia) of Virginia Beach; Betty Jo's daughter Barbara Stells Armentrout, her husband John and their children Liam, Caroline and Annabelle, of Chesterfield. Choko's ashes will be interred at Virginia Veterans Cemetery at Amelia, where a private family gathering will take place. Condolences may be registered at www.jtmorriss.com

Choko Kazama Loden, 92, departed this world on April 13, 2021 in Chester, Virginia. She was born in 1928 in Tokyo, Japan. By her teen years in Tokyo, she survived the March 1945 firebombing by US forces. She graduated from a two-year women's... View Obituary & Service Information

The family of Choko Loden created this Life Tributes page to make it easy to share your memories.

Send flowers to the Loden family.