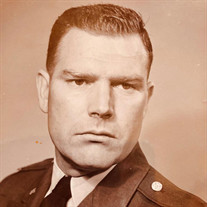 Charles James Williams, Jr. “Bubba” was cleared for his final take-off to St. Peter’s heavenly airport on September 9th, 2021. Born in Westernport, Maryland, but raised in Prince George County, Virginia on his family’s farm, he began distinguishing himself early in life at Disputanta High School by graduating second in his class and serving as Senior Class President, while active in the Future Farmers of America and playing baseball and basketball along the way. He needed his parents’ consent in 1948 to enlist in the Army at age 17. As an infantry soldier in the Korean war, he distinguished himself in battle, earning a Bronze Star with V Device, and quickly advanced in rank to become a senior NCO and drill sergeant. In 1955, he was selected for flight school to become a warrant officer helicopter pilot, and of the 48 candidates, only 17 graduated. He was an instructor pilot and Master Army Aviator who served two tours in Vietnam flying Huey and Cobra gunships. He also distinguished himself in aerial combat and was awarded an Air Medal with V device, and the Army’s Distinguished Flying Cross, our nation’s highest award for extraordinary aerial achievement. Even though he worked full-time during the day as a soldier, he studied in the evenings and received a Bachelor of Science degree from the University of Nebraska. After retiring from his 31-year Army career, he continued with aviation and excelled as a commercial pilot with the Commonwealth of Virginia’s Department of Aviation. He was the state’s Aviation Safety Officer publicly speaking to promote aviation safety throughout the state, and was selected as one of the governor’s pilots to be type-rated in the Commonwealth’s Citation II jet. He held instrument multi-engine commercial pilot and flight instructor ratings in both helicopters and fixed wing aircraft. He was awarded the Master Pilot Award – the Federal Aviation Administration’s most prestigious ward - which recognizes individuals who have exhibited professionalism, skill, and aviation expertise for at least 50 years of flying aircraft as a “Master Pilot.” He occasionally flew a helicopter for a local radio station. Although he loved flying, he loved his family even more. His mother was Ruby Hawk Williams and his father was Charles James Williams, Sr. He had four siblings: Jack Williams, Charlotte Garrett, Gwen Williams and Frank Williams. He adored his French wife of 36 years Monique Masure Williams who bore him two children, C. James Williams III (Kristina Walters Williams) and Suzanne Thérèse Garner (Garrett Howard Garner). Although Monique preceded him in death 1996, he was blessed to again find profound love with Janet Baldwin Evans his “sweet baboo” who passed in 2018. He had seven grandchildren: Alexa Williams Brown (David Brown), Charles James Williams IV “Chase,” Madison Suzanne Masure Williams, Matthew McElvie Williams “Mac,” Patrick Camden Williams, Gloria Monique Garner Mullennex (Logan Mullennex) and Thomas Angelo Garner. He also lived to meet his great-grandson Brodie Robert Brown. When not flying or with his family, Charlie was busy socially. He was a Master Mason of the Ancient Free and Accepted Masons and in 1975 served as Master of Alt Heidelberg Lodge # 821. He was also a Shriner, serving as President of the European Shrine Club in 1976. He was a Dad Advisor of the International Order of DeMolay in both Germany and Virginia, and a brother of Prince George Masonic Lodge # 115. He also enjoyed being a Sojourner and Hero, patriotic subordinate bodies of the Blue Lodge for Master Masons who are also military officers. He was active in both the York and Scottish Rites. He enjoyed his years as a member of Ye Anciente and Secret Order of Quiet Birdmen, an invitation only group of aviators, and was also an officer in the Virginia Aviation Historical Society. He served as an advisor to the Hanover County Airport. He was a spiritual man active in his family’s church, the Sycamore United Methodist Church. Bubba – Charlie – Jim – Willie – had many names throughout his long and wonderful life full of love, adventure and travel, too many places to enumerate, but it included visits to all the continents. A Celebration of Life will occur at 11:00 am October 9th, 2021 at the J.T. Morriss & Son Funeral Home Chapel, 820 W. Broadway, Hopewell, Virginia with lunch following at his church, Sycamore United Methodist, 9710 Old Stage Road, Prince George. He and his wife Monique will be later buried at Arlington National Cemetery where he will receive full military honors. His family thanks the In Good Hands Homecare Agency for outstanding care in the last two and a half months of his life. Condolences may be registered at www.jtmorriss.com

The family of Charles J. "Bubba" Williams, Jr. created this Life Tributes page to make it easy to share your memories.

Charles James Williams, Jr. “Bubba” was cleared for his final...

Send flowers to the Williams, family.