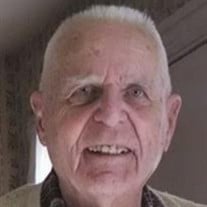 Pastor Charles Paul Clawson went to be with the Lord at 88 years of age on February 4, 2021, following a period of declining health. He was preceded in death by his parents Frank and Nelliefaye Clawson, brothers Don and Frank (Red) Clawson, son Frank Harold Clawson and daughter Vanessa Christine Justice, the former Mayor of Hopewell. Married on May 17, 1953, he is survived by his wife of 68 years Albertina “Tina” C. Clawson, two grandsons, Micah Justice and his wife Hannah, Joshua Justice and his wife Kristina, his two step-grandsons Charles Justice, and John Justice and his wife Peggy, and his five great grandchildren, Hannah, Olivia, Tekoa, Abigail and Jonathan Justice. Born February 25, 1932 in Kankakee, Illinois, Pastor 'Chuck' Clawson retired Chief Warrant Officer (CW3) US Army 1975 followed by 9 years as a Logistical analyst at Fort Lee, resigning in 1984. While in the service he earned his Bachelor’s degree in Psychology and M.S. Logistics Management. His service started at age 17 in Korea with the U.S. Air Force in 1949, rose to the rank of 2LT in 1958, transferring to the U.S. Army from 1967-75 with two tours in Vietnam. He received numerous awards and commendations including the Bronze Star with Oak Cluster and Air Medal for 25 Missions over Vietnam. Chuck had a passion for truth & giving. His crowning achievement was as a soldier of the Lord being ordained in 1984 and going out as a missionary to the Rio Grande Valley, Tx. establishing a mission church. Returning to Petersburg VA., he returned to Civil Service for a brief period as GS-12 leaving to start another church, Covenant Bible Fellowship which he pastored for over 30 years. A memorial service will be held at 2:00 p.m. on Saturday, February 27, 2021 at the Petersburg Chapel of J.T. Morriss & Son Funeral Home, 103 S. Adams Street, Petersburg, VA 23803. In lieu of flowers, memorial contributions may be made to The Gideons International in his name, P.O. Box 97251, Washington, DC 20090-7251. Condolences may be registered at www.jtmorriss.com

Pastor Charles Paul Clawson went to be with the Lord at 88 years of age on February 4, 2021, following a period of declining health. He was preceded in death by his parents Frank and Nelliefaye Clawson, brothers Don and Frank (Red) Clawson,... View Obituary & Service Information

The family of Charles Paul Clawson created this Life Tributes page to make it easy to share your memories.

Pastor Charles Paul Clawson went to be with the Lord at 88 years...

Send flowers to the Clawson family.