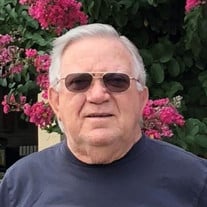 Cecil Bailey Peade, 79, of Prince George, passed away on Friday, July 9, 2021. He is the son of the late John Tennie and Ida Dora Anderson Peade and was born in Halifax, VA, on February 21, 1942. He was preceded in death by his wife, Dorothy Elizabeth Blaha Peade; siblings, Gloria “Gerry” Broyles, William T. Peade, Onsby Allen Peade, Glenn Overton Pead, Lacy R. Peade, Audrey Saunders Vaughan, Hubert T. Peade, John T. Peade, Jr., and Margaret Peade Cole. He is survived by his daughter, Sharon Marie Rudd and her husband Kit, of Midlothian; his son, Gerald “Summer” Peade and his wife, Lori, of Prince George; grandchildren, Lane Peade and Lauren Peade, both of Prince George; a brother, Edward Nathaniel “Doi” Peade of Chesapeake; and numerous nieces and nephews. Cecil worked at Brown & Williamson Tobacco in Petersburg where he met his late wife, Dorothy. Cecil and Dorothy were married in 1965. In 1985, Cecil realized his dream to have his own business and opened Smithfield Glass & Mirror in Smithfield, VA. After many years of hard work, he retired from the business. In his youth and young adult years, he loved playing baseball and softball. Cecil enjoyed riding his lawnmower, taking care of his yard and growing tomatoes. Although he grew other fruits and vegetables in his garden, he was most proud of his tomatoes. His greatest passion was bluegrass music. Throughout his life, he enjoyed singing, listening to records, and playing his guitar with family and friends. Cecil started every day by going out for a cup of coffee. Over the years, his favorite place to go would vary, but he made friends everywhere he went. The family will receive friends on Tuesday, July 20th from 6-8 PM at J.T. Morriss & Son Funeral Home – Petersburg Chapel, 103 S. Adams Street. A funeral service will be held the following day in the chapel at 11 AM with entombment immediately following at Southlawn Memorial Park. In lieu of flowers, donations may be made to the American Lung Association at www.action.lung.org.

Cecil Bailey Peade, 79, of Prince George, passed away on Friday, July 9, 2021. He is the son of the late John Tennie and Ida Dora Anderson Peade and was born in Halifax, VA, on February 21, 1942. He was preceded in death by his wife, Dorothy... View Obituary & Service Information

The family of Cecil Bailey Peade created this Life Tributes page to make it easy to share your memories.

Cecil Bailey Peade, 79, of Prince George, passed away on Friday,...

Send flowers to the Peade family.