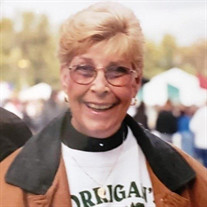 Carol Abbey Corrigan, 82, of Prince George, VA, passed away peacefully June 29, 2021 with her family by her side. Born in Fountain Springs, PA on September 22, 1938 to the late Earl and Kathryn Richards, she is preceded in death by her beloved husband of 37 years, James Wayne Corrigan. She is survived by her loving children, Jill Anne Corrigan-Magruder (Bruce), Devon Corrigan (Alice), Erin Corrigan (Brenda) and Ryan Corrigan (Mackenzie); “Mommom’s” adoring grandchildren, Sean Corrigan-Cummins, Darron Corrigan-Cummins, Dr. Meghan Nelson (Chase), Chaelin Corrigan-Magruder, Zach Meeks, James Patrick “JP” Corrigan, James Milo Corrigan, Shannon Corrigan, Reagan Corrigan, Reilly Corrigan, Jackson Geisel, Ava Geisel, Wyatt Geisel and Maeve Corrigan; treasured sister Beth Richards Koropchak (Paul); niece, Amanda McClure; nephew, Blake McClure; great-niece, Hope Gantz; great-nephew, Reed Gantz. Carol was raised in Fountain Springs with a bevy of cousins, most notably, but not limited to, “the Richards boys”. This band of eight brothers were her first cousins but were much more like brothers to Carol. Bill, Earl, Lew, David, Robert, Glenn, Wade, and Kenny doted over her for all of her years. Upon graduation from Butler Township High School, Carol attended the Roxborough School of Nursing in Philadelphia where she formed precious friendships, she cherished her entire life. Shortly after marrying her hometown sweetheart, Carol stepped away from her nursing career to have a family and support her husband’s military career. After raising four children, traveling the globe, and finally settling in Virginia, she resumed her employment and her education at Saint Leo College where she earned her bachelor’s degree in Business Administration. There she mentored and advised countless students, with best buds Marion and Norma by her side, and eventually retired as the Director of St. Leo College on Ft. Lee. She loved her family, she loved her friends, and she loved her Bichons. She will be forever remembered and sorely missed by Muffin & Molly and many more. A funeral service will be held at the J.T. Morriss & Son Chapel in Hopewell on Monday, July 5, 2021 at 11:00 am with visitation one-hour prior. Interment will follow at Merchants Hope Memorial Gardens. The family is being served by J.T. Morriss & Son Funeral Home of Hopewell VA. Condolences may be registered at www.jtmorriss.com.

Carol Abbey Corrigan, 82, of Prince George, VA, passed away peacefully June 29, 2021 with her family by her side. Born in Fountain Springs, PA on September 22, 1938 to the late Earl and Kathryn Richards, she is preceded in death by her beloved... View Obituary & Service Information

The family of Carol Abbey Corrigan created this Life Tributes page to make it easy to share your memories.

Send flowers to the Corrigan family.