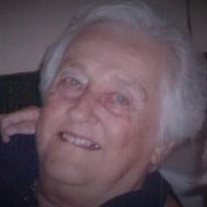 Betty Lee McMurray Bingle Galderise, 94, of Prince George, VA, went to be with the Lord on Monday, October 18, 2021. Betty was born in Hamilton County, Ohio in 1927 and has been a resident of Prince George, VA since 1949. She was the daughter of the late Richard and Minnie Pepper McMurray; and her adoptive parents, the late Aunt Dorothy and Uncle David Bingle. Preceded in death by her loving husband of 51 years, Charles C. Galderise, Jr.; and son, Thomas Alan Galderise. She leaves to cherish her memory her children, Charles ‘Chuck’ Galderise III (Kathy), Ronald Lee Galderise, Donna Parton (Calvin); sister-in-law, Judy Kessel (Phil) of Garland, TX; grandchildren, Charles IV (Jennifer), Amy Snow (JB) and Chase Galderise; and Tommy Galderise (Gretchen), James, Adam and Kendal Parton; four great-grandchildren, Grace Church and Emersyn Snow, Emily and Brady Galderise; and several nieces, nephews, extended family and friends. After graduation she worked in Cincinnati, OH until she joined the Army in 1948 at the age of 21. She completed boot camp at Camp Lee, later to be renamed Fort Lee, VA. She then reported to Fitzsimons Army Hospital in Denver, Colorado. There she would meet and marry her husband, Charles ‘Yank’ Galderise, who would later own The Gun Rack in Prince George until his death in 2000. After Betty returned to Prince George, she was employed by Kresge Five and Dime Petersburg and Birchett’s Hatchery until the birth of her third child. After being a mom and housewife for ten years, she returned back to work and retired as a postal clerk for the United States Postal Service from 1967-1987. Betty was an avid reader and loved reading The Richmond Times daily. She especially loved her cats and all animals, and car rides on a Sunday. A memorial service will be conducted at 5:00 p.m., Friday, October 22, 2021 at Unity Baptist Church, 4951 Mt. Sinai Rd. Prince George, VA 23860. The family will receive friends following the service. In lieu of flowers, donations may be made to the Prince George Animal Shelter, Prince George Emergency Crew and St. Jude Children’s Research at P.O. Box 187, Memphis, TN 38101-0187. Condolences may be registered at www.jtmorriss.com.

Betty Lee McMurray Bingle Galderise, 94, of Prince George, VA, went to be with the Lord on Monday, October 18, 2021. Betty was born in Hamilton County, Ohio in 1927 and has been a resident of Prince George, VA since 1949. She was the daughter... View Obituary & Service Information

The family of Betty Lee McMurray Bingle Galderise created this Life Tributes page to make it easy to share your memories.

Send flowers to the Galderise family.