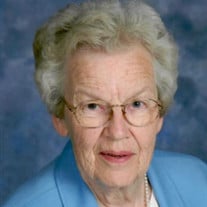 Barbara Pamplin Shell died on February 22, 2022 at her home at Cedarfield Senior Living Community in Richmond, Virginia, after a long and happy life in the midst of the love of her family. She is survived by her daughters, Pamela Shell Baskervill and her husband, Charles T. Baskervill, and Patricia Shell Caulkins and her husband, David W. Caulkins; grandchildren, Ann Cabell Baskervill, Susannah Baskervill Pittman and her husband, Lonnie Pittman, Sarah Caulkins Krzastek and her husband, Scott Krzastek, and Whitney Caulkins; great-grandchildren, Preston Pittman, William Krzastek, and Violet Krzastek. She was predeceased by her husband of 59 years, Louis C. Shell. Mrs. Shell graduated from Petersburg High School and Madison College, now JMU, with a Bachelor of Science in Chemistry. A strong supporter of JMU, she maintained the friendships she made there throughout her lifetime. She taught chemistry, physics and general science at Thomas Dale High School and worked as an assistant chemist at Brown and Williamson Tobacco Company. For many years, she was active in civic, religious and public affairs in Petersburg. A member of St. Mark's United Methodist Church, she was active in all aspects of church life since its formation in 1955. When her children were in the Petersburg public schools, she devoted much time and effort to the Parent Teacher Association on the local, district and state levels. She was also a member of the Salvation Army and Virginia Cooperative Extension Service Advisory Boards, the Board of Trustees for the Historic Petersburg Foundation, Inc., and the Boards of Directors of the Petersburg Chamber of Commerce and the Petersburg Home for Ladies, Inc. She served as legislative assistant for the Virginia General Assembly. She was elected to City Council in 1974 as the representative of the First Ward. At that time, she was one of only two women to have served on the City Council in the history of Petersburg and was the first woman elected by the ward system. She was elected Vice Mayor in 1976. She was a member of the Dinwiddie Airport and Industrial Authority from 1989-1993, serving as both vice-chairman and chairman. In 1993, the Department of Aviation for the Commonwealth of Virginia recognized her for her individual achievements, integrity and years of dedicated service to her community and the Petersburg Airport. She was included in Who's Who of American Women and Who's Who in the South and Southeast. She enjoyed photography and golf, but her true love was people. She was engaging, loyal, and caring with a keen sense of humor. She worked alongside her husband to promote integration in Petersburg prior to the passage of civil rights legislation and believed that all people should be treated with respect and dignity. Her deepest commitments were to her faith, her family and friends. A graveside service will be held at Blandford Cemetery on Friday, February 25, 2022 at 3 o'clock p.m. with Reverend Susannah Pittman, her granddaughter, officiating. In lieu of flowers, contributions may be made to St. Mark's United Methodist Church, P.O. Box 1905, Petersburg, VA. 23805 or a charity of your choice. The family especially wishes to thank the Cedarfield Health Care staff and James River Hospice for its compassionate care and love. Condolences may be registered at www.jtmorriss.com.

Barbara Pamplin Shell died on February 22, 2022 at her home at Cedarfield Senior Living Community in Richmond, Virginia, after a long and happy life in the midst of the love of her family. She is survived by her daughters, Pamela Shell Baskervill... View Obituary & Service Information

The family of Barbara Pamplin Shell created this Life Tributes page to make it easy to share your memories.

Send flowers to the Shell family.