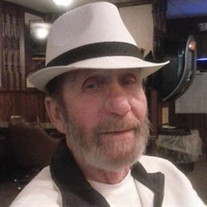 SGM Arthur Joseph Le Mire, age 79, born in Detroit Michigan, and resident of Hopewell, Virginia, passed away peacefully at his residence on February 18, 2021. He is survived by his 99-year-old mother, Gertrude E. Bentz of Hopewell. Preceded in death by his Biological Father, Merle Stanley Le Mire, raised by Robert J. Bentz, Survived by his wife of 61 years, Joyce M. Le Mire of Hopewell, Son Christopher D. Le Mire and Donna M. Le Mire. Preceded by Son Keith D. Le Mire, wife Ann B. Le Mire, Daughter Cheri A, Pratt and Kevin M. Pratt. Grandchildren Aaron and Kendal Le Mire, Mathew Le Mire, Kristin Le Mire, Justin Le Mire, Joshua Pratt, Rachael and Josuah Townsend. Three Great Grandchildren. He served 34 years of service between the US Army and Civil Service. He served three years in Vietnam and was awarded the Bronze Starr, Several Citations and Decorations through his military and Civil Service career and was inducted into the Quartermaster Hall of Fame. He was a member of the American Legion Post 2, JThompson Wyatt, Petersburg and was a Past Commander. Paid for Life member of the Forty&Eight, Voiture Locale #1530. Past Nationale Sous Chef de Chemin de Fer of the Forty&Eight. Member for 43 years of the Hopewell Moose Lodge #1472, a Life Member of the Hopewell VFW#637. Honorable Colonel in the Honorable Order of Kentucky Colonels and an Honorable Tennessee Squire. He was a great fan of Nascar racing, enjoyed being around the water and socializing with family, Veterans, Soldiers' and friends; many of which gave him the honor of calling him Dad. He will be cremated and put to rest at Arlington National Cemetery. In lieu of flowers a contribution in his Memory may be made to the American Heart Association, 4240 Park Place Court. Glen Allen, Virginia 23060. Condolences may be registered at www.jtmorriss.com.

SGM Arthur Joseph Le Mire, age 79, born in Detroit Michigan, and resident of Hopewell, Virginia, passed away peacefully at his residence on February 18, 2021. He is survived by his 99-year-old mother, Gertrude E. Bentz of Hopewell. Preceded... View Obituary & Service Information

The family of Arthur Joseph LeMire created this Life Tributes page to make it easy to share your memories.

Send flowers to the LeMire family.