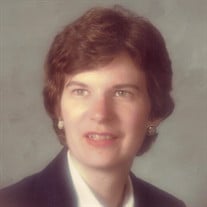 Anne Middleton Woehr passed away on April 22, 2021 at the age of 74. Born in Richmond, VA, Anne grew up in the upper peninsula of Michigan, New Orleans, LA, and Falls Church, VA. These early experiences instilled a wide range of interests. She was a member of the George Mason High School Class of 1964 and graduated from Mary Washington College with a degree in Mathematics and Physics. It was while earning that degree that Anne met the love of her life, Frederick Woehr, and they married in 1969. As a computer programmer for the US Navy and Bell Aerospace in the late 1960s and early 1970s, Anne was an early pioneer for women in the technology industry. Anne and Fred raised their two daughters, Cheryl Anne and Melissa, in Clarence Center, NY, Clifton Park, NY and Grafton, MA. In each location, Anne actively supported their local neighborhood and was highly engaged in their daughters’ activities, including as a Girl Scout leader and camp mom. She will be missed by many whose lives she touched. Anne and Fred returned to Virginia upon Fred’s retirement and enjoyed their new home along the Potomac River. In that setting they celebrated their 50th wedding anniversary with friends and family. As Corticobasal Degeneration limited Anne’s abilities, Fred’s loving devotion to her care, with the attentive support from caregivers Karen and Kristina, enabled Anne to remain at home overlooking osprey nests and the flowing river beyond their door. Anne was predeceased by her brother, John Middleton. In addition to Fred and their daughters, Anne is survived by son-in-law Matthew Soots, granddaughter Audrey Soots, sister and brother-in-law Kathy and Reg Yearsley, sister-in-law and brother-in-law Anne and John Royster, beloved nieces, nephews, and cousins, and cherished friends. Services will be held at J T Morriss & Son Funeral Home in Hopewell, VA on May 8 followed by burial at Merchants Hope Memorial Gardens.

Anne Middleton Woehr passed away on April 22, 2021 at the age of 74. Born in Richmond, VA, Anne grew up in the upper peninsula of Michigan, New Orleans, LA, and Falls Church, VA. These early experiences instilled a wide range of interests. She... View Obituary & Service Information

The family of Anne Middleton Woehr created this Life Tributes page to make it easy to share your memories.

Send flowers to the Woehr family.