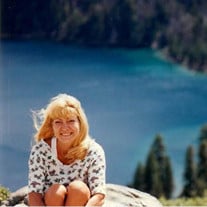 Ann Gail Christopher (Wojciechowski) was born on July 28, 1951, to Elaine and Lenard Wojciechowski in Chicago, Illinois. She moved to the gold-paved roads of Sacramento, California, in 1979 where she lived (sometimes married and sometimes not) with her sons Christopher and Joshua until they graduated and moved on. At that point, Ann moved to Virginia in 2001 and married David Christopher in 2004, moving to McKenney Virginia. Ann worked many jobs, but her favorite was an accounts receivable/payable at various military bases, including Forts Mather, McClellan, and Lee. She retired in 2008 and lived in peace in the countryside with her various animals, some more tame than others. She was a beautiful singer and the life of the party, and everyone loved her devilish wit and sunny laugh. She was an avid reader of Stephen King and player of card games, although she was known to bend the rules from time to time. She lived her life her way, for better or for worse, and was headstrong, proud, and loved by everyone. She passed into the light on May 10, 2021, after a ferocious but brief battle with cancer. She is survived by David, her sons Chris and Josh, and her six grandchildren Violet, Rosalind, Eleanore, Luka, Beatrix, and Niall. Her ashes will be interred in her favorite places in each of her three hometowns, and brief outdoor services will be held at each place during interment. If you are interested in participating in one of these services her son Chris can be reached at [email protected]

Ann Gail Christopher (Wojciechowski) was born on July 28, 1951, to Elaine and Lenard Wojciechowski in Chicago, Illinois. She moved to the gold-paved roads of Sacramento, California, in 1979 where she lived (sometimes married and sometimes not)... View Obituary & Service Information

The family of Ann Gail Christopher created this Life Tributes page to make it easy to share your memories.

Send flowers to the Christopher family.