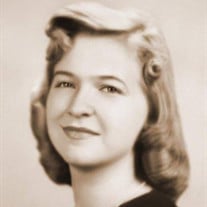 Anita "Liz" Snyder Hughes, 82, of Hopewell, passed away on Friday, February 11, 2022. Born July 20, 1939 in Oakwood, VA, she was the daughter of the late William Grant Snyder and Eva Elizabeth Sarver Snyder. She was also preceded in death by... View Obituary & Service Information

The family of Anita Snyder Hughes created this Life Tributes page to make it easy to share your memories.

Anita &quot;Liz&quot; Snyder Hughes, 82, of Hopewell, passed away on Friday,...

Send flowers to the Hughes family.