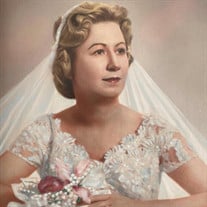 FOREMAN, Alice Moss, 92, passed on peacefully in the early hours of February 4, 2021. She was a daughter, a sister, a cousin, a niece, an aunt, a mother, a grandmother, and a great grandmother in her time. Alice was preceded in death by her husband of 60 years John Foreman; her parents Joseph and Lula Jane Moss; her siblings Garren Moss, Pete Moss, Hugh Moss, Ann Honeycutt, Everett Moss, Jane Boyd, Dorothy Ross, Josephine Jones, Sallie Moss, and Joseph “Sonny Boy” Moss; and granddaughter Melanie Foreman. Born in Hoffman, NC, she was part of the humble family farm. Riding caboose on the Moss sibling train, she was blessed by her older sisters and brothers all her life not the least of which her surviving sister Sue Gamble. Born just months before the start of the Great Depression, Alice and her family subsisted on a 165 acre in Pine Bluff. She graduated from Aberdeen HS in 1946. It was a graduating class of 19 taught by a graduate from the year before. The surviving members still exchange letters and Christmas cards and had their last reunion in 2011. Alice and several sisters moved to Charlotte and lived together as they each built a successful career. Alice earned her nursing degree from Charlotte Memorial Hospital in 1958. Soon after she met and fell in love with John. They were wed on June 28, 1958 at Myers Park Baptist Church in Charlotte. Soon after John was promoted by The Tennant Company to a new territory based in Hollywood, FL and they traded the sand hills of NC for the sandy beaches of southern Florida. There they bought their first house and had two children, Sallie and Victor. Duty called seven years later, and they moved back to Greensboro, NC. There they had one their 3rd child, Albert. In Greensboro, Alice rejoined the workforce as a public health nurse. She said this was her favorite job. It entailed going into the neediest neighborhoods and providing vaccinations to children who might otherwise go without. Fast forward to 1971 and John’s career brought the family to Chester, VA. The family bought a house on Percival St and joined Chester Baptist Church. Alice and John raised the family there and ended their days there. During that time Alice worked at John Randolph Hospital. She worked in the ER, OR, day shift and night shift and at the end was Nursing Shift Supervisor for the entire hospital. But her favorite role was working in OB/GYN and delivering the babies. “How was work, Mom?”, we would ask. “It was a full moon last night and were we ever busy!”, she would reply. After launching three kids and retiring, Alice designed and built her dream retirement home three blocks away. She and John were able to volunteer, socialize, and travel during an extended retirement into their 90s. Their family grew to six grandchildren – Joey, Ben, Max, Melanie, Lucy and Charlotte, and two great grandchildren – Aubrey and Joseph Jr. The family is grateful for the outpouring of love and support in celebrating the life of Alice. Special thanks to Katie Clagon and the staff at The Crossings at Ironbridge for their care. It can be said that Alice’s life revolved around her family and friends, but it would be truer to say her family and friends revolved around her. She will be missed. A memorial service is planned for 1 PM, Sunday, February 14, 2021 at Chester Baptist Church located at 4317 School St, Chester, VA 23831 with COVID-19 precautions in place. The service will also be Livestreamed on ChesterBaptist.com and Facebook/Chester Baptist starting at 1:45 PM. In lieu of flowers, a donation can be made to the church at https://secure.accessacs.com/access/oglogin.aspx?sn=94652.

FOREMAN, Alice Moss, 92, passed on peacefully in the early hours of February 4, 2021. She was a daughter, a sister, a cousin, a niece, an aunt, a mother, a grandmother, and a great grandmother in her time. Alice was preceded in death by her... View Obituary & Service Information

The family of Alice Marie Moss Foreman created this Life Tributes page to make it easy to share your memories.

FOREMAN, Alice Moss, 92, passed on peacefully in the early hours...

Send flowers to the Foreman family.