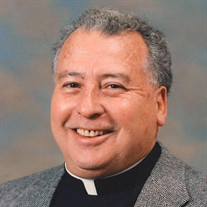 The Reverend Alberto Cerezo Fernandez, a senior priest of the Diocese of Yakima, died Monday, August 16, 2021, following a weekend preaching assignment in Petersburg, Virginia, for the organization Food for the Poor. He was 86 and had been suffering from atherosclerotic disease. Fr. Cerezo was born July 20, 1935 in Madrid, Spain to Emilio Cerezo and Elena Fernandez. He is survived by his sister, Elena Cerezo Fernandez; niece, Elena Sanchez Cerezo; nephews, Pedro Sanchez Cerezo and Jorge Sánchez Cerezo, and other family members in Spain. After attending elementary school in Madrid, he entered the minor seminary of Alcala de Menares in 1947, where his studies included Latin and the humanities. He entered the major seminary, Seminario Conciliar de Madrid, to study philosophy and theology, graduating in 1960. Fr. Cerezo was ordained to the priesthood January 3, 1960, by the Most Rev. Leopolodo Eijo y Garay, Bishop of Madrid and Patriarch of the West Indies. Fr. Cerezo served in four parishes in Madrid until 1968, when he came to the United States to serve the growing Hispanic population. He also received a master’s degree in counseling psychology, working for a time in educational settings. He became a U.S. citizen in 1974. Assignments in California, Texas and New York preceded his move to the Yakima Diocese in 1979, and he formally joined the diocese in 1982. Assignments included general Hispanic ministry, as well as parish work in Toppenish, Moses Lake, Warden. He served as pastor in St. Joseph Parish, Waterville; Sacred Heart Parish, Prosser; St. Francis Xavier Parish, Cashmere; and Our Lady of the Snows Parish, Leavenworth. In 1995, Fr. Cerezo began a Hispanic ministry assignment in the Archdiocese of Seattle, with limited ministry there continuing after his retirement in July 2002. He usually spent the spring and summer in the Seattle area, and the fall and winter in Miami. He faithfully attended the annual Yakima Priests Retreat each spring to maintain contact with his brother priests. For many years he traveled extensively to visit Catholic parishes around the country to share the mission of Food for the Poor, an ecumenical Christian nonprofit organization based in Florida that provides food, medicine, shelter, and other services to the poor in Latin America and the Caribbean. At the time of his death, despite being in poor health, Fr. Cerezo had six trips scheduled to support the ministry. Donations may be made in his memory to the Diocese of Yakima Seminarian Education Fund, P.O. Box 2189, Yakima, WA 98907-2189; or Food for the Poor, 6401 Lyons Road, Coconut Creek, FL 33073. Brookside Funeral Home is in charge of arrangements. A Vigil service is planned for 6 p.m. Thursday, August 26, at St. Paul Cathedral, 15 S. 12th Avenue in Yakima, with Mass of Christian Burial set for 11 a.m. Friday, August 27. Services will be livestreamed at the Cathedral Facebook page: www.facebook.com/StPaulCathedralYakima. Fr. Cerezo will be buried at Calvary Cemetery in Seattle at 11 a.m. August 30.

The Reverend Alberto Cerezo Fernandez, a senior priest of the Diocese of Yakima, died Monday, August 16, 2021, following a weekend preaching assignment in Petersburg, Virginia, for the organization Food for the Poor. He was 86 and had been suffering... View Obituary & Service Information

The family of Fr. Alberto Cerezo created this Life Tributes page to make it easy to share your memories.

The Reverend Alberto Cerezo Fernandez, a senior priest of the...

Send flowers to the Cerezo family.